skip to main | skip to sidebar

I have a dear friend who has always admired my quilts. In fact, she bought my Charmed Stars quilt that I donated to a silent auction and it's now hanging in her daughter's room. When she moved in to a new house two years ago, I promised to make her something for her guest bedroom; she wanted a wall hanging to match the room's new bedspread and pillows. But time got the best of me and it took over a year for me to get back with her about the quilt. By the time I did, she had moved on from her new guest bedroom colors and decided she wanted something for her living room.

Our deal... She continued to insist that she pay me for whatever creation I made her. I cut her a deal instead, saying that if she bought the fabric, I would give her the labor for free. (Some people will go to great lengths to increase their stash!) I suggested she look at my Pinterest Quilt board to pick out a few that she liked. She poured through the pins and even had her husband look through them. They found a few they liked but there was one in particular that they were drawn to. Of course, it happened to be the most beautiful, and most difficult, quilt she could have picked: 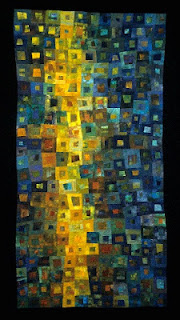 This quilt is gorgeous, isn't it? It is a work of art, containing hundreds of hand dyed pieces. I decided to go for it; deciding I could imitate the effect with several different batik cuts. I had no batik's in my stash but I've been wanting to make a batik quilt for quite some time. This was the perfect excuse. I told her I couldn't replicate the quilt but it would serve as inspiration for whatever I made for her. 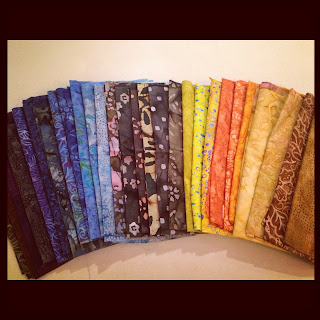 The improvisational piecing didn't really worry me. I used the method I came up with for my Starburst quilt which basically means putting together a bunch of wonky blocks and laying them out and making more blocks to go in between. 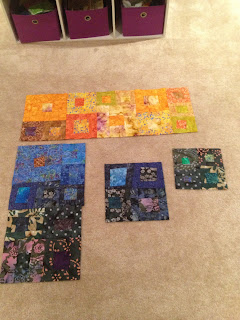 It takes a long time and it requires a lot of re-arranging and cutting and sewing. And the layouts vary based on the mood I'm in. But it's always fun and interesting. So I really enjoyed the process. 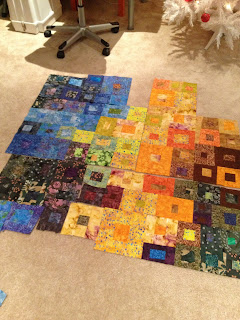 The photo above is version 1 of this quilt. That's right, I made two different versions. After finishing the version #1, I wasn't completely satisfied with the end result. It was a beautiful quilt but it didn't follow the pattern of the original inspiration. The yellow sort of ebbed and flowed throughout instead of making a line through the quilt with the blue along the edges. And since I had so much fabric left over, I decided to try again, thinking I would let my friend pick her favorite and I would keep the other one. 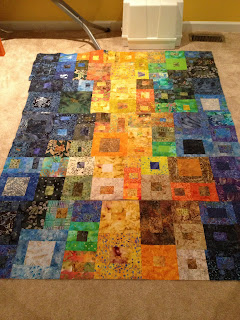 I did some very heavy quilting in it. 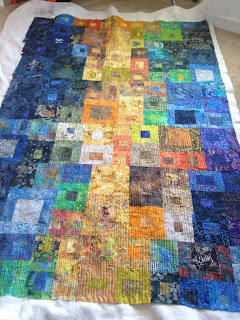 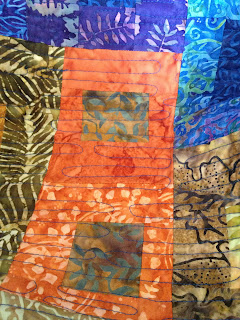 Version #2 ended up looking closer to the original quilt but my friend liked version #1 better so that's the one she picked. She made a great choice - it was my favorite too. Cancun Sunset #2 is still awesome though and it's currently in my sewing room waiting to be hung up. 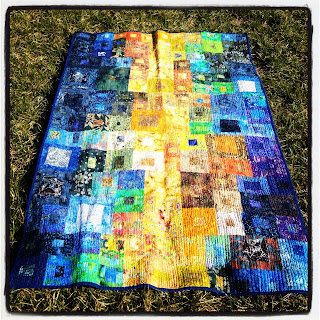 I'm so glad I challenged myself with these quilts. I spent hours and hours on them but I love the way they turned out. It will be a while before I tackle such an ambitious project again but I can't imagine making another quilt that is as beautiful as these.

Here is the photo of Cancun Sunset #1, hanging in my friends living room. It's beautiful, eh? 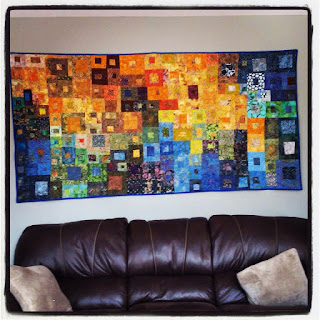 Labels: and the best part of all is that i STILL have batiks left over

Thanks for stopping by! I've been quilting since my mother-in-law helped me make my first quilt in 1999. I spent several years drawing inspiration from books, magazines, and quilters in my local community.

When I started blogging in 2008, I discovered many wonderful quilters from around the world who are happy to share their projects. This has pushed me to further test my creativity. (I could seriously spend all day surfing through quilting blogs!)

If you have any questions, please feel free to email me at nkubat (at) indiana.edu. I hope you enjoy my blog.

For a little inspiration...